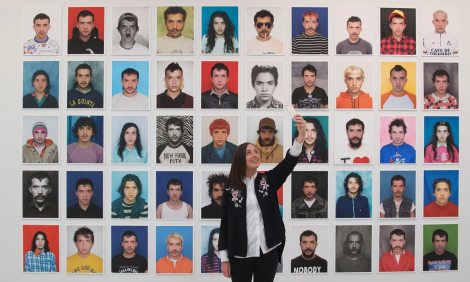 ‘Vanity of vanities; all is vanity’, so goes the saying of old – and yet one that’s never rung truer than today. If the values of every age or society could be symbolised by a particular phenomenon, then ours would be the selfie: those self-taken, ubiquitously-shared photographs that so embody the ‘me me me’ cries of the 21st century. Whether a sign of social media addiction, or growing societal narcissism, a bold new exhibition at the Saatchi Gallery explores an ulterior significance: the idea that the selfie is also a form of artistic self-expression.

At face value, in its exploration of the ‘selfie’ an artistic movement in its own right, the exhibition inevitably sounds gimmicky. But the ideas at the heart of this exhibition are undeniably valid, let alone intriguing. As the curator Nigel Hurst says, ‘In many ways, the selfie represents the epitome of contemporary culture’s transition into a highly digitalised and technologically advanced age as mobile phone technology has caught up with the camera… The selfie is by far the most expansionist form of visual self-expression, whether you like it or not… The art world cannot really afford to ignore it.’

Indeed, for a show as achingly trendy as this one, it might have sounded incongruous to open this piece with a quote from the Old Testament. But the exhibition itself reminds us that the selfie stretches back long before the millennium, with roots in the self-portraiture of the early Renaissance through to modern art. In the first room, we’re presented with digital interactive slideshows of self-portraits by painters such as van Gogh and Rembrandt, where visits can ‘like’ their favourite pictures. It’s a pertinent reminder of not just how we engage with art nowadays, but Instagram might be the modern-day equivalent of an art gallery (indeed this is a young person’s exhibition, and no secret is made of it).

We also see the first photographic self-portrait taken by Robert Cornelius in 1839, as well as George Harrison’s selfie in front of the Taj Mahal in 1966 and Chuck Close’s large-scale self-portrait in 1967. There is something very revelatory about these images, the first of their kind. As we move towards the present day, we see the form of the self-portrait more fully exploited by artists such as Tracey Emin giving birth to coins and bank notes in I’ve Got It All (2000) and Francis Bacon’s distorted faces.

It is in the contemporary sections of the exhibition, which illustrate the emerging creative potential of the selfie as we know it today, that the ideas espoused by the exhibition become most exciting and convincing. Across one wall are the 50 passport photographs taken daily by the Colombian artist Juan Pablo Echeverri. In the same room are works from The Honeymoon Suite by artist Juno Calypso, who photographed her solo visit to a honeymoon hotel in Pennsylvania. They explore themes such as the construction of identity, and the performative nature of selfies.

The exhibition also veers into the fascinating territory of social commentary, with images documenting the craze for celebrity selfies and photobombs. One image shows a crowd of people taking a selfie with Hillary Clinton, their faces to the camera leaving her without an audience. Observed from the outside, it’s a scene of madness – a telling glimpse of our obsession with self-documentation, and our inability to engage unless somehow via ourselves. Alongside the memorable image of Barack Obama, David Cameron and Helle Thorning-Schmidt taking a selfie, we’re reminded of the social statement that selfies represent, and unanimity of its appeal.

But not all of the works strike such a frivolous note. One of the more powerful selfies is a photograph by Nan Goldin, called Nan One Month After Being Battered. The artist is black-eyed, posing to ensure that she wouldn’t forget the damage caused by a boyfriend’s violence. The image is distressing, but illustrates the quietly revealing potential of a selfie versus other forms: with the artist and the subject of the work as one, it’s an inter-creative piece, inviting the viewer into a very intimate, mirror-like space.

Nan One Month After Being Battered, Nan Goldin, 1984

Whether or not you’re persuaded that the selfie can be deemed a form of art, what impresses is the variety of ideas and representations that it has spawned in the everyday person. ‘In the 16th century, it was only the artists who had the skills, materials and tools to create self-portraits,’ says Hurst, adding ‘now we all have that wherewithal through our smartphones.’ But it’s not a show to take too seriously either, and looking around the gallery, perhaps the most memorable, overseen aspect of the show is the collective number of visitors with their phones out, selfie sticks extended, photographing themselves in front of these works, and the irony going unnoticed – the ultimate exhibit of them all.