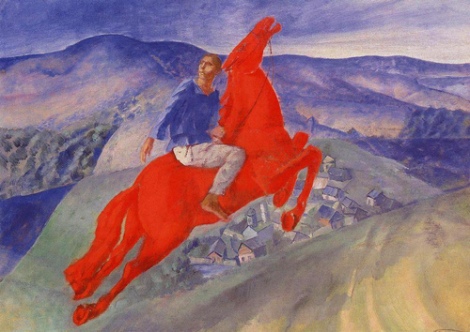 If political unrest is often a catalyst for artistic innovation, then the Russian Revolution is no exception: when Lenin and the Bolsheviks rose to power in 1917, thereby ending centuries of autocratic Tsarist rule, artists’ imaginations became as free as the society they lived in. But in the growing tyranny of Stalin’s Soviet rule, this period of history reminds us that the opposite too it true: that freedom of artistic expression can be as much suppressed as it can be liberated by the political ideologies of its time, often with dark consequences.

Such is the narrative of the Royal Academy’s exhibition, Revolution: Russian Art 1917 to 1932. Looking back a hundred years later, it illustrates this turbulent period where the optimistic dawn of a new era became crushed by the increasingly suppressive Soviet regime. It’s a much a history lesson as an art exhibition – alongside some of the key paintings and sculptures that epitomised the emerging artistic movement of the era, we’re presented with posters, photographs, film clips and even food coupons – and suitably so: we’re offered a comprehensive understanding of art in its full social context. 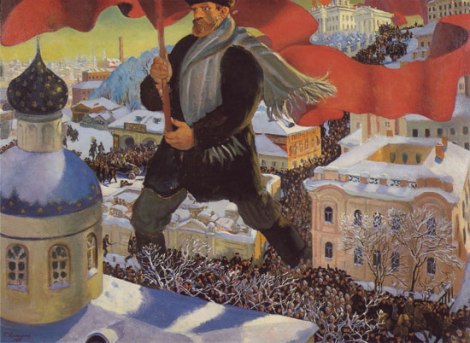 In an attempt to establish a new aesthetic that reflected the changing current of the times, the early work by avant-garde artists show a rich diversity of ideas. Each embraced an overriding sense that anything is possible, from Wassily Kandinsky’s pioneering of abstract modern art to Kazimir Malevich’s invention of Suprematism. Malevich wanted to create art that moved away from visual representations of reality, towards instead emphasising the supremacy of form and colour: a painting that was ‘original and an end in itself’. This was epitomised by his Black Square, a representation the ‘zero of form’, in many ways evocative of the potential of this new age.

The artist and architect Vladimir Tatlin also designed a series of gliders, naming them Letatlin – a hybrid of his own name, and the Russian word letat, ‘to fly’. Beautifully crafted, they symbolise the spirit of hope as much as any of the other works on show – but rather prophetically, they never flew with any success. For indeed, as depicted in Boris Kustodiev’s ominous painting, The Bolshevik (1920), Stalin’s increasingly repressive government quashed all promises of individual freedom. 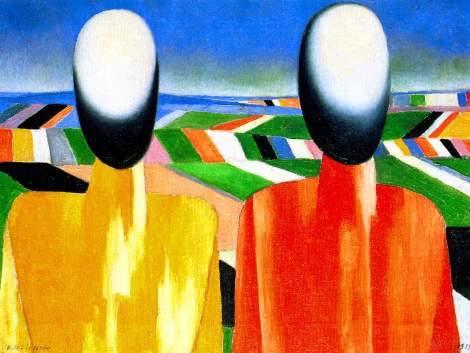 Stalin’s aim to turn the Soviet Union into a world power had devastating consequences for the Russian population. Industrial workers were exploited as slaves, while the mass agriculturalisation of the countryside left peasants without work or shelter. Soviet propaganda depicted a triumphant and celebratory story: photographs and films enabled easy distribution of images of golden wheat fields, while Alexander Deinaka’s painting ‘Textile Workers’ somewhat glorifies the modern industrial worker. But as Malevich’s faceless, dehumanised Peasants (circa 1930) reminds us, the reality was disturbingly different.

Not all of the art is quite so politically charged, and there are many artists to admire in their own right. An example is Kuzma Petrov-Vodkin, whose painting was concerned with developing a unique spherical perspective that showed the curvature of the Earth. His wide horizons often suggest at the progression of time in a nostalgic, metaphysical way. Although he produced propaganda art and supported the Soviets, his work implies a tension between the values of Old Russia and the Soviets: the Petrograd Madonna’s (1918) protectiveness over her child suggests a reluctance to embrace new social values, while the rider of the red horse in Fantasy (1925) is tellingly staring backwards. 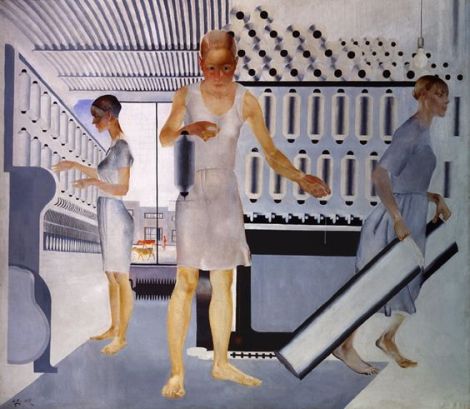 The end of the exhibition strikes a chilling note, as Stalin’s vision for a politically unified Sovet Union finally takes hold. A 1932 exhibition entitled ‘Fifteen Years of Artists of the Russian Soviet Republic’ (the inspiration for this present exhibition) was a desperate final attempt to proclaim the importance of freedom within the arts. But it ended with Stalin declaring Socialist Realism the only acceptable artistic movement for the Soviet Union, suppressing the work of all avant-garde artists in favour of a collective, authority-approved style. Here we see the consolidation of his utopian vision as illustrated by Deineka’s Race; meanwhile the work of outspoken artists such as Malevich was put under lock and key.

But a century later, the fact that these banned canvases are back on display sheds a redeeming light on an otherwise bleak segment of history – for ultimately, what this show upholds is the enduring power of art. It’s a stark reflection of the role played by art in shaping a national identity, both as a positive lease of creativity and dark vehicle for control. Amidst our own period of global tensions, this is an exhibition with cautionary undertones, and it’s hard not to take notice.