Having well and truly digested the delights of the Louvre and the Musée d’Orsay over several years, my visit to the Musée d’Art Moderne de la Ville de Paris was long overdue. At best, most tourists would likely overlook it as a back-up plan for a rainy afternoon – but, as I discovered, unjustifiably so. Not only is the Musée d’Art Moderne less crowded, less grand and less famous (all of which are welcome attributes in the populated world of Parisian attractions), it also houses a complimentary and distinctive addition to the art collections of the capital.

Following the Louvre’s display of Western art from the Middle Ages to 1848, and the Musée d’Orsay from 1848 to 1914, the Musée d’Art Moderne creates something of a natural triad, carrying the baton from 1905 into the present day. Since its establishment in 1961, it has relied almost exclusively on benefactors and donors such as Dr Maurice Girardin and Michael Werner, and therefore boasts a particularly eclectic array of work from a range of sources. Fauvism, Cubism, the School of Paris, Abstraction, Decorative: all corners of contemporary art are touched upon and represented in some form, albeit not en masse. The collection is modest, and that’s its beauty.

Based in a 1930s art nouveau building, the museum is the perfect backdrop for its own art gallery. The paintings and sculptures in their diverse, often incoherent forms sit against the vast white walls of tranquil, open rooms. This helps the spectator to focus on the unique impact of works such as Robert Delauney’s Rhythme numero 1 (above), and the inherent rhythms and movement of its patterned colour discs. But the art itself makes an impressive selection, and I had a number of other favourites. 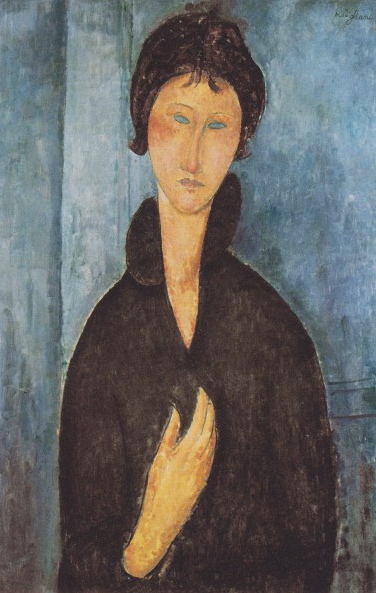 There is a both a graceful sensuality and a ripe sexual energy emanating from this portrait by Amedeo Modigliani. The tone of soothing melanocholy is undercut by the vigorous blue of the eyes, creating a kind of corrupt beauty. Notice how the curved alongation of the female form – a classic trait of the Italian artist, who was greatly influenced by the ‘primitive’ art of African carvings and Cambodian sculptures – centres around the more threatening points of her hand and chest, neither of which quite meet. This is a sexual desire of failed sophistication, cloaked in a darker, shameful lust. 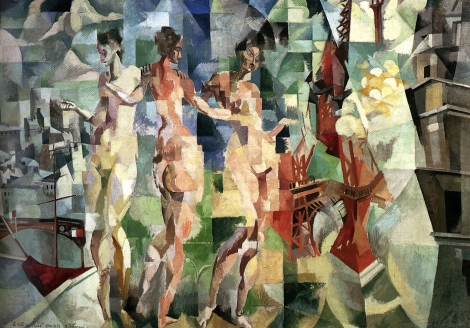 La Ville de Paris – not in the predictable form that previous generations had depicted it, but in the new artistic terms of a modern time. Robert Delauney’s famous painting illustrates the principles of ‘simulteneity’, an idea which originated with French philosopher Henri Louis Bergson. ‘Simulteneity’ proposed that art should capture a more realistic perception of how the world impresses itself upon the consciousness, not through a still snapshot of a life but in a tableau of overlapping, fleeting moments. The fragmented shapes of an iron bridge, the Eiffel Tower and the female form all intersect to convey the experience of a vibrant, fast-paced Parisian society in 1912.

Considered by critics a ‘born colourist’, this painting by Raoul Dufy is brimming with the vitality and movement at the heart of the modernist aesthetic. The energy is all in the colour, and the painting is a fitting dedication to the instrumental moment that inspired Dufy’s artistic skill. Dufy had been standing on the jetee of Honfleur when a girl in a red dress suddenly ran past him, and the vision sparked an epiphany: he suddenly realised the more powerful and lasting impression of colour, rather than that of shape or form, for creating movement in art.

The museum holds temporary exhibitions every six weeks, but the permanent collection itself makes for a worthily recommended visit. This is an enriching gallery where you can actually engage with artwork, make your own imaginative connections, and above all, think – all for a free entry.