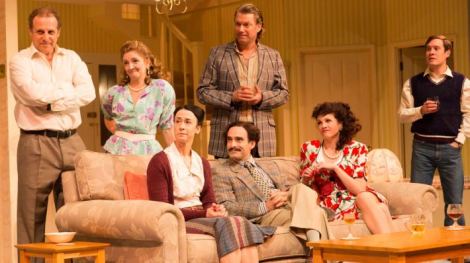 The revival of any play always begs a new question about its significance. Has its relevance endured? Will it still stand up and speak to us on a second viewing, in the same or a different way? For Alan Ayckbourn’s comedy A Small Family Business, these concerns are even more pronounced. As a damning metaphor of Thatcherite Britain, it would seem like a play written for its time – and yet returns to the National Theatre thirty years after its debut on the same stage.

We’re in the comfort of suburban England when Jack McCracken leads his relatives in a toast to his succession of the family business. Soon after this implicit celebration of capitalism, however, he soon learns that the business’ success has been helped along by his in-laws’ illegal dealings. After his daughter is further caught shoplifting, Jack becomes embroiled in multiple family conspiracies that result in the erosion of his highly-regarded principles, the consequences of which act as a cautionary tale to the direction of Thatcher’s Britain.

‘I don’t think that I’ve ever been a political writer, but I think I’ve been a social writer,’ says Ayckbourn – but here, the two modes are indivisible. One can quite palpably see the values of Thatcherism dripping into the fibres of everyday life. This is a society that has been encouraged to achieve what it wants however it must. Jack, who is jovially and sympathetically portrayed by Nigel Lindsay, starts the play by affirming to his family the virtue of honesty – even stealing paperclips will be considered an evil under his watch – but soon discovers the danger of playing by the rules. In fact there are no rules, and one moral compromise quickly descends into corrupt villainy. 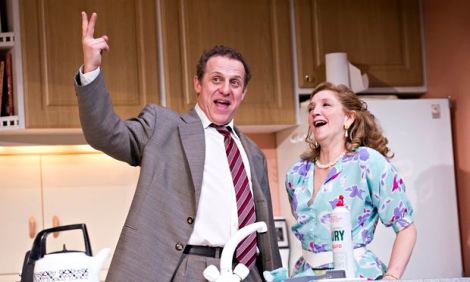 The big problem with this play is that none of it is particularly shocking. Samantha McCracken, less convincingly played by Alice Sykes, gets involved in theft and drugs; the store’s private detective, Matthew Cottle’s wonderfully creepy Mr. Hough, indulges in blackmail, resulting in his murder, covered up by Jack and his wife, Poppy, warmly played by Debra Gillett. A few of the darker moments were met with laughter – indeed, while Ayckbourn may have written A Small Family Business as a farce, this was intended to underline the family’s moral descent, not soften it.

Easily the highlight of the play is Tim Hatley’s set, another splendid triumph by the National Theatre. The action takes place in a kind of open doll’s house, so we can see the characters move between rooms and floors, and scenes fluctuating between simultaneous events. This complements the play’s analysis of the changing world of family and home during the 1980s – Ayckbourn pulls apart the facades of outwards appearances as we literally see into every aspect of the McCracken’s private world.

There is a sense that the play we see before us satirises what later became such a fundamental (though obviously less extreme) foundation of society, it evokes a world which no longer holds much shock value. The comedy is buried up as the laughter of another generation – perhaps that is a worrying indictment – and the familiar reflection of our own. A Small Family Business is a very watchable and enjoyable play, but to return to my original question, I reckon it has less to say now than it did first time around.