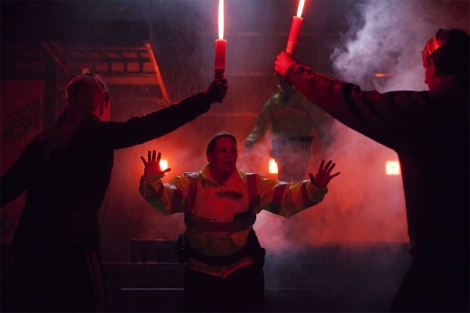 The first of a season at Hampstead Theatre shining a spotlight onto Britain’s public services, Wildefire takes on the world of modern policing. The play casts an honest glance at life in the Met, and attempts to understand some of the recent events that have prompted such public scrutiny – namely the inside corruption and dealings with gang culture that culminated in the 2011 Tottenham riots.

The overriding message of the play – that the stress of the police force inflicts emotional, moral, psychological damage on its officers, for whom we should feel some sympathy – is embodied in its eponymous character, Gail Wilde. At the start of the play, she is a young, fresh-faced PC fighting for all that’s good; by the end of the play, she’s a broken woman, consumed by an underhand culture of bribery and dishonesty. 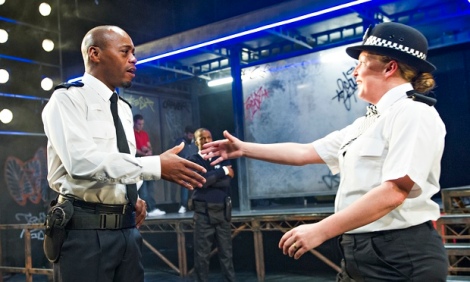 While Lorraine Stanley’s downward spiral is gripping to watch, it’s slightly too extreme in a play pushing at 90 minutes for us to develop any emotional investment in the character. It’s almost too simple a tragedy, and ultimately skims over some of more complex issues under scrutiny. The playwright Roy Williams may be esteemed for writing about the moral and social intricacies of British society, but here his approach errs towards the predictable (the choice of title is itself rather too obvious).

It manages, however, to be a menacing and visceral production. As Sir Robert Peel reads out the 1829’s Nine Principles of Policing, hooded youths slowly seize an ominous hold over the stage. The set alternates between graffiti-covered gangland territory and a police questioning room, an uncomfortable but real juxtaposition: ‘the police are the public and the public are the police’, Peel says, but Wildefire distorts all sense of this meaning, unveiling a society where power is inverted.

Urban policing tends to form the subject of television more than theatre. One therefore can’t help feeling that this foray was a wasted opportunity, for little new is said or learned. A longer, two-part production might have given the chance to iron out the outstanding complexities – here it bites off a little more than it can chew.