It’s often said that drama should be seen rather than read, and with good reason. But when I came across Death of a Salesman as a student, I remember its heart-wrenching power pouring off the page unlike any other play I’d studied. Often named ‘the greatest American play of the 20th century’, the story painfully lays bare the regrets and failures of life against all of its initial hopes and promises – and in this latest revival by the RSC, to commemorate the 100th year of Arthur Miller’s birth, its brilliance is done full justice.

One of the hallmarks of Death of a Salesman is the way it inverted and expanded on the genre of tragedy. Breaking from usual tradition, the protagonist is no longer Shakespeare’s man of high stature: it is an ordinary salesman, Willy Loman – quite literally a ‘low man’ – blinded by the lofty but ultimately cruel prospects of the American Dream. He spends his life convinced that his ‘big break’ is around the corner, but it continually evades him; at the end of 35 years of work, still no more than an underling, he is thrown on the scrap heap in a society now unsympathetic to his values.

If Miller’s intention was to create a tragic hero to whom all of his audience could relate, then this is precisely what Anthony Sher achieves. On the one hand, he evokes a brutal pity: a man robbed of dignity, naive and in denial about the fruitless pursuits of his existence. Yet Sher also shows him to be stubborn, hypocritical and selfish, clinging to foolish pride. He pierces to the heart of what makes Willy such a compelling figure: a man deserving of our compassion, flawed enough that we might see part of ourselves reflected in him.

A consequence of Willy’s ‘failure complex’ is to instill in his sons the false conviction that they too will be successful because they are popular rather than hard-working. Alex Hassell is particularly moving as Biff, a boy damaged by his father’s puffed-up ambitions as he realises there is nothing heroic about himself at all. Jumping back and forth between the past and present scenes of Willy’s mind (the play was originally titled The Inside of His Head), Biff and Happy (played by Sam Marks) continue to remind the audience of the gulf between the hope of youth and the disillusionment of adulthood. 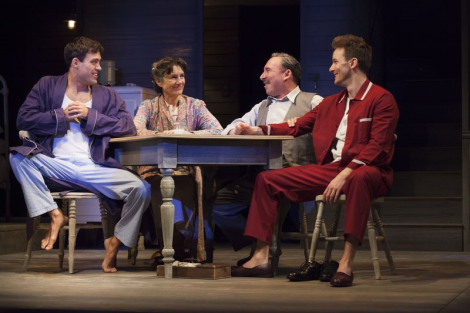 Arguably the strongest aspect of this production, however, is the way in which Harriet Walter succeeds in elevating the supporting role of Linda Loman – Willy’s wife – to the status of tragic heroine in her own right. She conveys the plight of a woman whose devotion knows no bounds, such that she must perpetuate his self-delusion to satisfy his ego. When she famously declares to her sons that ‘attention must be paid to such a person’ – apparently the driving force of her life – the pain of Walter’s delivery suggests that she might be pleading for herself.

The level of insight that Arthur Miller achieves between four people, if two relationships, is quite extraordinary – and this production of Death of a Salesman does not let us forget it. Anthony Sher and Harriet Walter are at their absolute best, such that by the end of the play, one appears to have developed an instinct for their characters’ psyche. It’s the mark of true talent, which this play is brimming with.