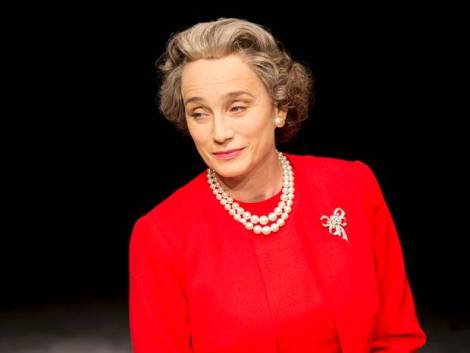 The arts are currently thriving with portrayals of the monarchy, but few have proven as relevant or inventive as The Audience. In Peter Morgan’s acclaimed script, we find ourselves privy to the Queen’s weekly meetings with each of her Prime Ministers. The premise lends itself to a comic interpretation of her relationship with each figure, as well as a wider look at the monarch’s place in the world of politics.

The play is organised as a series of non-linear comedy sketches, flicking between key moments in British politics from Churchill to Cameron and back again. One moment the Queen mischievously points out the cream on Harold Wilson’s face from drinking tea; the next, she’s dozing off in the middle of David Cameron’s ramblings. But the humour is never taken to frivolous extremes: she is personified as a staunch defender of her institution, passionate and, despite the occasionally cheeky glint of her eye, impassive where necessary.

The effect of this patchwork of scenes is to keep the Queen, rather than history, as the central subject – for ultimately the play is about her maturation in the role of monarch. We are not only an audience to her political dialogues, but also to her inner thoughts and feelings about becoming Queen. Her soliloquies as a young, rebellious child about the prospects of her position are interspersed with later reflections, bringing a human dimension, even a vulnerability, to the ‘postage stamp with a pulse’.

Dame Helen Mirren’s handing of the baton to Dame Kristin Scott Thomas for this production has invited an unwarranted level of comparison. There is no doubt that Mirren’s prior brilliance in the role sets the bar high, but it is not a gold standard. Scott Thomas is superbly cast in her own way – deliciously wry, endearing and yet commanding. It is in fact rather enlightening to see the Queen’s persona freshly interpreted, particularly for a play that tries to peel back her many sides.

The supporting cast are uniformly strong, if caricatured: David Calder as an antiquated Churchill, Gordon Kennedy as a strangely sympathetic Gordon Brown, Sylvestra le Touzel as an affronted Margaret Thatcher.

Scott Thomas aside, however, if the play should be considered outstanding for any particular reason, the costume changes possess a magic unseen elsewhere in the West End. Dress changes happen on the stage before us, as the Queen glides almost unnoticed from a grey, spectacle lady to a regal young woman – elegant, seamless and sophisticated, like the production as a whole.