Widely regarded by critics as one of, if not the greatest American musical of all time, it seems remarkable that this is Gypsy’s first return to the West End since its 1973 debut. But in this dazzling, buoyant, ferocious and heartrending revival – frankly, you can take your pick of adjectives – boy has it been worth the wait. Performing at the Savoy Theatre after a Chichester Festival transfer, Jonathan Kent’s exemplary production sets the stage ablaze with uncompromising vigour, and reminds us just why this show is deserving of its status as a classic.

Based on the real-life memoirs of American performer Gypsy Rose Lee, the story tells of her mother Momma Rose’s (Imelda Staunton) relentless attempts to achieve vicarious stardom through her daughters. Desperate for her most outgoing daughter to gain success on the vaudeville circuit, she is forced to turn her attentions onto the quieter Louise (later Gypsy, played by Lara Pulver) when June escapes her clutches. But with the decline of vaudeville during the depression, it is as a striptease act in the corresponding rise of burlesque houses that Louise finally makes a name for herself – much to the embittered revulsion of her mother.

Perhaps the most phenomenal aspect of Gypsy is how it reminds us that there can be more to a musical than song and dance. Through the character of Momma Rose – widely regarded the peak and the greatest challenge for a female performer in the history of the American musical – we have the psychological exploration of a complicated, fascinating, vulnerable and yet emotionally manipulative character. Stephen Sondheim likened her to a Showbiz Oedipus; blinded by her desire for fame and driven to the edge of madness, I’d say she’s more the musical’s answer to King Lear. 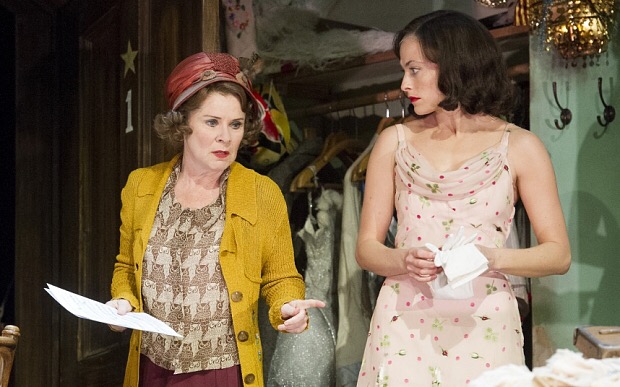 It goes without saying that any production Imelda Staunton has her name to will be of guaranteed brilliance, but in this titanic role she is on optimum form. Every inch of her being conveys the frustrated, deluded cravings of the archetypal stage mother, which unravel formidably in the second half of the play. As she sings Rose’s Turn, a demented performance which seems to take place in the theatre of her mind, she begins to mock the burlesque routine of her daughter’s now famous act. It’s the most dramatic moment of the play, and Imelda excels as the very epitome of resentment: her name up in lights, we ponder the extent to which she dreamed her dream for herself or for her daughters – but whatever the answer, she still manages, if briefly, to evoke a deep pity.

Her performance exceeds all expectations in complement to a wonderful script by Arthur Laurents, music by Jules Styne, and lyrics by Sondheim, as do the efforts of the supporting cast. Peter Davison is very amiable as the long-suffering Herbie, driven away by Momma’s mania. Lara Pulver achieves the right balance as Louise, and the scene where she blossoms from neglected wallflower to the Grande Dame of Striptease is especially gripping. Staging the production at the Savoy Theatre also adds a glorious dimension, a fitting venue for the Vaudevillian world Rose seeks to conquer.

There are times when all the elements of a production thrive in magical cohesion; Gypsy is such an example. A sparkling tour de force of musical theatre, this is an exemplary revival by Jonathan Kent, one over which the West End will reminisce for a long time. But it’s also a reminder to any theatre snobs that musicals can indeed carry the weight and power of a serious drama – and in this capacity alone, it would be a travesty not to see it.