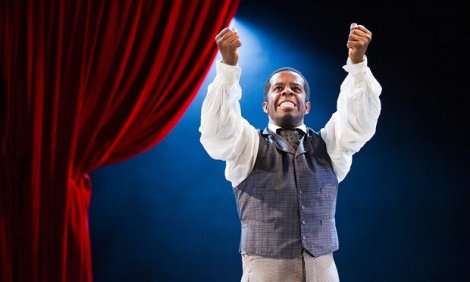 Following the recent backlash over the lack of diversity in the Oscar nominations, this revival of Red Velvet was appropriately timed. First staged at the Tricycle Theatre in 2012, Lolita Chakrabarti’s play tells the true story of African American actor Ira Aldridge, and the shocking level of racial prejudice aimed at him when he became the first ever black actor to play Othello in 1833. A testament to its huge critical acclaim, this is the only transfer that Kenneth Branagh has invited into his season of Plays at the Garrick Theatre – and this time, against the backdrop of the current debates in the film industry, the production benefits from amplified significance.

The play opens at the end, with an old, embittered Aldridge (Adrian Lester) explaining to a journalist why he never returned to perform in London. It’s a clever framing device which then transports us back in time to the moment that should have been the pinnacle of Aldridge’s career: his turn at playing Othello when the lead actor falls ill. While the company director may be confident that the medium of theatre should embrace social equality and progression, public riots against the abolition of slavery rage on outside, and the existing cast have mixed reactions to the casting of a black actor in the place of a white veteran. But it is the wrath of critics, appalled that ‘owing to the shape of his lips, it’s impossible for him to pronounce English’, who bring Aldridge’s opportunity to a crashing halt.

The play might be a vehement attack on the prevailing racism of Victorian London society, but it’s also by default an inspiring portrayal of how far our attitudes have come in the last two centuries. Some of its critique leaves perhaps too little to the imagination – the world of the play is sometimes as black and white as its subject – but there are some more understated moments of power, such as the final image of Aldridge ‘whiting’ up to play King Lear. The drama is also enriched by the fact that since first playing the role of Aldridge, Adrian Lester took on the lead role in Othello in the National’s Theatre’s 2013 production, adding a perfect touch of irony.

But where the play excels most is in its wider exploration of the role of theatre within society. It took me a while to understand the relevance of the play’s title, a nod to the fiery red-velvet Victorian curtain that hangs at the back of the stage. Ultimately it’s a symbol of upper-class luxuriance, one which indicates the elitism of theatre, perhaps in a dangerous way. Indeed, the central question propounded by Red Velvet is clear: should theatre serve to appease or challenge the imaginations of its audience? The answer is of course the latter, and the play is a damning reminder of both the potential and the responsibility theatre has to probe the social and political attitudes of its audience. The fact that whereas the audience applaud Aldridge, it is the board who disproved of him, is a small sign of hope in an otherwise cynical story.

Fiery, passionate and resolute, Adrian Lester plays Aldridge to tragic perfection. His transition from youthful impetuousness to old-age aggression is particularly startling and haunts the play; he elevates the play from the story of one man to an international reality. The rest of the cast fulfil each of their parts very well: Tom Edel-Hunt as Charles Kean, who staunch conservatism epitomises the very attitude that Chakrabarti’s play shames; Emun Elliott as Pierre Laporte, the forward-thinking theatre director who eventually betrays his friend Aldridge’s interests; and Charlotte Lucas as Ellen Tree (or Desdemona), quietly thrilled by Aldridge’s arrival and open to his suggestion of a less gestural, more realist method of acting.

Red Velvet is a strong play, not least as a dramatisation of a profoundly disturbing story, but also in prompting us to remember the power held by theatre in addressing or indeed changing attitudes. But most importantly, it calls us to question the extent to which contemporary theatre is pushing boundaries or merely catering to existing appetites – and for that alone, I hope its popularity endures.