Afternoon tea and apocalyptic catastrophe: in Caryl Churchill’s latest play, Escaped Alone, her trademark absurdity is stretched to ambitious heights. Running just over the course of 50 minutes, the play transports us between the mundane chitchat of four women in a brightly-lit garden, to the story of global disaster from a pitch-black void on stage. Elliptical and oblique, the nonsensical framework proves richly enigmatic – and so emerges, in true Churchill style, a tale both thought-provoking and unsettling.

We begin with Mrs. Jarrett (Linda Bassett), the character who inhabits the two contrasting worlds of the play. Stepping not behind a curtain but through a door in a fence, she joins an intimate gathering of three other women in someone’s back garden. There they sit and talk about modern-day and old-age trivialities – DIY, retirement, local developments, what’s happening in the latest TV serial – until the lights suddenly black out. The stage is now framed by a flickering red electric light, as the singly illuminated Mrs Jarrett proceeds to describe the destruction of civilisation as we know it. Then, as the two narratives continue to intertwine and interrupt each other, the garden gossip resumes.

But this apparent juxtaposition between domestic comedy and dystopian terror is more subtly layered, and this is where the cleverness of the play sets in. While the garden setting seems an initial haven of comfort, the surface of normality becomes increasingly distorted as we discover, in separate monologues, that the women each occupy unspeakable realities of their own. Vi (June Watson), the ex-hairdresser, is consumed by guilt for murdering her husband and robbing her son of a father; Lena (Kika Markham), is practically paralysed by loneliness and depression; and Sally, the ex-GP, harbours a compulsive phobia of cats. 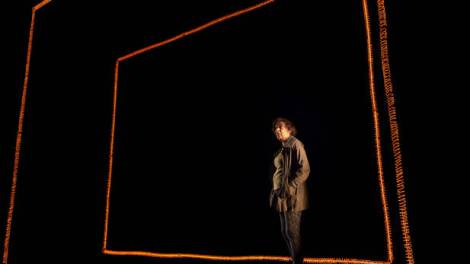 Between these increasingly surreal scenes, Mrs. Jarrett’s graphic descriptions of human calamity seem comparatively lucid. Though her story-telling evokes images of biblical plagues and our own war on terror, it becomes the main source of the play’s humour. She ludicrously describes how, with the planet struck by the threat of starvation, 80% of food was diverted to TV studios, meaning ‘commuters watched breakfast on iPlayer on their way to work’ while obese people cut slices off their bodies to sell. The tale becomes macabre but amusingly satirical – in the midst of social pandemonium, a kitten has even become famous.

Linda Bassett’s brilliant wry delivery in these scenes is the high point of the play. But Escaped Alone benefits from a strong cast of four versatile actresses – the stage directions describe four women over the age seventy, a pleasant rarity for the West End – who gel together particularly well. June Watson balances Vi’s loud abruptness with a more serious sensitivity, while the manic edge of Deborah Findlay’s plain Sally catches the audience by surprise. Kika Markham also gives a beautifully understated performance as Lena.

It’s impossible to try and decipher Caryl Churchill’s drama literally, and neither is it the purpose of her writing. But what this play achieves in expressing is a complex sense of the modern world: terror lurks beneath normality, humour lies within the horrific, and the line between the familiar and the unknown is blurred. It’s a memorable play for the Royal Court Theatre to kick off their 60th birthday, and assures us of the playwright’s ever-evolving dramatic potential.