Few artists could ever claim a career as triumphant as Georgia O’Keeffe’s. A pioneer of American modernism, her innovative abstract imagery took painting to new heights: she was the first female artist to receive worldwide critical acclaim, the first ever to be exhibited at New York’s Museum of Modern Art, and in 2014, her 1932 painting Jimson Weed/White Flower No. 1 broke records as the most expensive painting by a female artist ever sold at auction.

And yet, at the same time, few artists have ever been so misunderstood. Active during a time when art was still dominated by male perspective, O’Keefe’s work has often suffered from masculine appropriation. Her floral still-lifes have become so iconic as apparent depictions of female genitalia, for instance, that her entire legacy has gradually been reduced to ‘the artist who painted flowers that looked like vaginas’ – an interpretation which O’Keeffe spent her entire life refuting.

Now, in a retrospective which marks a hundred years since O’Keeffe’s first exhibition, the Tate Modern sets out to dispel all this outdated, gender-stereotypical cliché. In its endeavour to display her as a ‘multifaceted artist’, the exhibition presents us with over a hundred of her works, enabling an fundamental reassessment of her aesthetic – and it’s very much a success.

Through the chronological organisation of her work, we’re reminded of the breadth, versatility and journey of her art. From her experimentation with charcoal and watercolour as an art teacher in the 1910s, to her more stylised paintings of landscapes and river views as an established artist in the 1960s, the exhibition traces the strong emergence of her abstract style. Paintings such as Red and Orange Streak (1919) right up to Sky Above the Clouds III (1963) show her skill with colour and shape, and illustrate her tangibly emotional connection to the landscape. 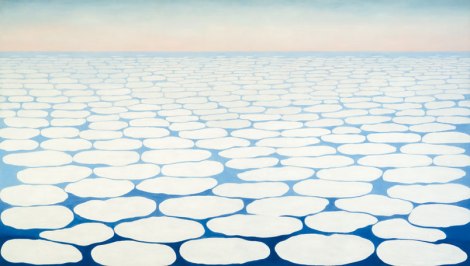 Her art takes inspiration from sensory stimulation: she described colour as a ‘language’, and her paintings show a continued interest in synaesthesia and chromothesia, ’the idea that music could be translated into something for the eye.’ The undulating forms of her imagery suggest lyrical textures, while her use of colours and shaded contours create a harmonic effect. Each akin to a kind of musicality, Blue and Green Music (1919), for instance, juxtaposes contrasting shapes while Black Place III is infused with a striking dynamism.

Such qualities put O’Keeffe firmly amidst this new tide of modernism; and yet there are many aspects of her art which went against the avant-garde movements of her time. When Marcel Duchamp and other contemporaries began to declare that art should be “anti-retinal”, she refused to be moved: for O’Keeffe, art should be beautiful, and as illustrated by each of her paintings, she never compromised on this principle.

Indeed, her art is charged with a particular beauty and passion for nature, and it seems to be this which resonates so intensely in her famous flower paintings. But according to O’Keeffe, paintings like Red Canna (1924) and Oriental Poppies (1928) were merely drawing attention to the sheer splendour of her subject: ‘Nobody sees a flower, really, it is so small. We haven’t time… So I said to myself – I’ll paint what I see… I will make even busy New Yorkers take time to see what I see of flowers.’ 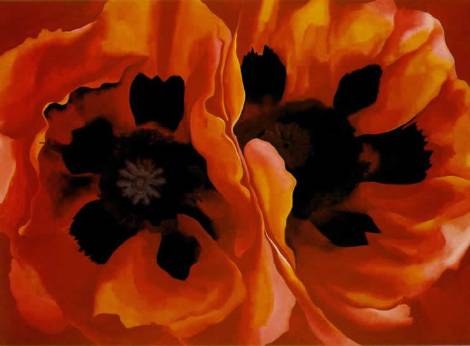 ‘Men put me down as the best woman painter,’ Georgia O’Keeffe claimed, before adding: ‘I think I’m one of the best painters’. This declaration encapsulates perfectly the successes and struggles of O’Keeffe’s career: she may have acquired the status of art’s first feminist, but her legacy reminds us of the dangers of dwelling on an artist’s gender in the appreciation of their work. Thanks to the Tate Modern, we can now understand and enjoy O’Keeffe in the full, if late bloom of her talent, unencumbered by the flawed associations her work has carried for a century.

One response to “Georgia O’Keeffe: An Artist in Late Bloom”