Think Impressionism, and your mind will conjure paintings by Cezanne, Monet and Renoir long before it reaches the shores of Australia. It might not be a continent particularly synonymous with late 19th-century art, let alone art in general – but think again. This intimate exhibition at the National Gallery, featuring approximately 40 paintings, explores a familiar movement in an unfamiliar context – the impact of European Impressionism on Australian art – and the narrative is riveting.

In putting Australian Impression firmly on the map, the exhibition keeps its focus to four key artists: Tom Roberts (1856-1931), Arthur Streeton (1867-1943) and Charles Conder (1868-1909), known as the so-called ‘Heidelberg School’, and John Russell (1858-1930). As the only artist to have both studied and worked abroad in Europe, Russell is the slight odd one out of the pack, but offers a key perspective; the significance of this movement is as much about the artists’ relationship to the European painters as their distance from them.

A holiday in Mentone, Charles Conder, 1888

It began with the ‘9 by 5 Impression’ exhibition held in Melbourne in 1895 – a landmark moment in the history of Australian art, and the opening section of this show – named after the dimensions of the cigar boxes used as the surface of the paintings. It was here that Roberts, who had been inspired by his recent travels across Europe, first introduced Impressionism to Australian society. The movement caused a creative stir, and the challenge for artists was to appropriate it and make it uniquely Australian.

It is significant that these events correlated with the run-up to federation in 1901, when Australia became an independent nation. This art becomes a vehicle to express and explore the country’s new and changing national identity. We lose the familiar European quality of Impressionism, and welcome the scenes of a different society. Roberts’ ‘Allegro con Brio: Bourke Street West’ (1885-86) shows a bustling midday Melbourne, one of the world’s richest 19-century cities, while Condor’s ‘A Holiday in Mentone’ (1888) carries a sense of optimism, a society starting anew.

The national landscape paintings – section two of the exhibition – is where this fresh flavour of Australian Impressionism really begins to emerge. Painting en plein air, a practice picked up by Roberts in Europe, the artists sought to capture the bright lighting and colour effects that typified their country as authentically as possible. The canvases are particularly impressive for their depiction of this stark sunlight, dusty and hot, as seen in Streeton’s ‘The purple noon’s transparent might’ (1896) and Roberts’ ‘A Break Away’ (1891). In Streeton’s ‘Fire’s On’ (1891), the lighting takes on a harsh, powerful character of its own as a rail worker is killed in an explosion. The landscape towers heroically over the scene, a threatening image of nature versus man, as Impressionism is taken in a new direction.

But the real stand-out of his exhibition, the artist to whom the final section of the show is dedicated, is Russell. Perhaps owing to his expatriate status, his contribution to the movement of Impressionism has been somewhat overlooked (his work was notably left out of the Royal Academy’s 2013 ‘Australia’ exhibition). In actual fact, this was a figure who, after a chance encounter in Belle-Île, an artist’s colony during the 1880-90s, became an acquaintance of Monet, and was able to hone his Impressionist and colourist techniques by watching the Master at work. 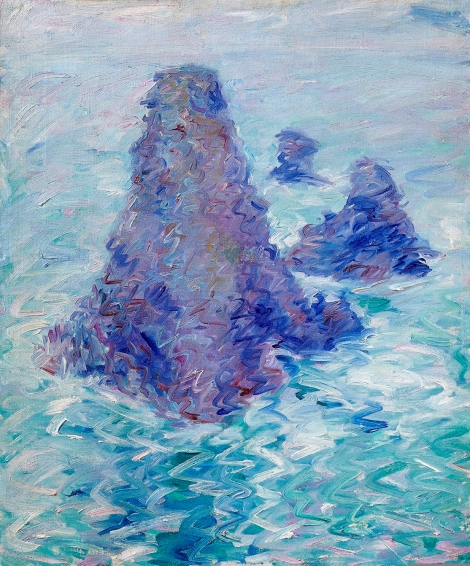 His experimentation with these new-found methods is visible in his work, for instance the loose brushstrokes in ‘Aiguille de Coton, 1900’, one of the most captivating paintings in the collection. It was also while painting these dreamy coastal scenes that he attracted the attention of a young Matisse, who became his pupil for three summers. In a sad end to Russell’s work as an artist, when his wife died in 1908, he destroyed many of his canvases; those that do survive seem to illustrate a talent that has never been fully acknowledged.

Indeed, there is a something quietly revelatory about the entire exhibition and the story it mounts. In particular, it is fascinating to see the subtle ways in which a major artistic movement shifted and evolved in response to a different society, both in a cultural and aesthetic way. It builds on our understanding of Impressionism, of the internalisation of art, in an unforeseen way – rather like finding across a key jigsaw piece that you didn’t realise was missing.