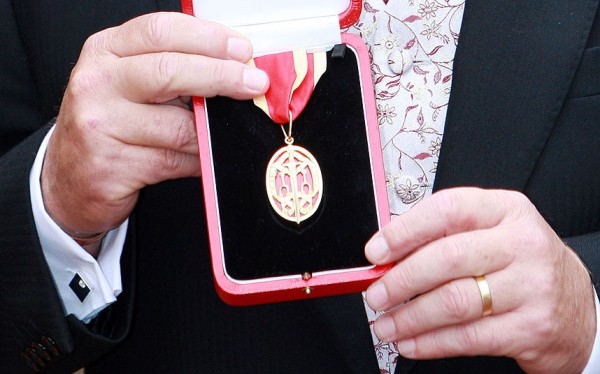 Poor Victoria Beckham. Not only was the Christmas family holiday in the Caribbean ‘ruined’ by unfortunate weather, but her husband, fully expecting to become Sir. David in the New Year Honours list 2014, was ‘mortifyingly’ snubbed by the committee. (Talk about third world problems). As if that didn’t take the British public enough by surprise, 2013’s Wimbledon champion Andy Murray was similarly left out of the proceedings, despite being considered a dead cert for the title. Still, one man’s loss is another’s gain, as they say – and I found myself on the side of those whose faith was restored in a rewards system rapidly becoming all too unrewarding and unsystematic.

As stated on the gov.uk website, the UK honours system sets out to recognise people who have either ‘made achievements in public life’ or ‘committed themselves to serving and helping Britain’. Ordinary citizens can be celebrated for outstanding achievements, for their dedication to ‘making life better for other people’; its principles, then, are fully estimable – or on the surface at least. The problem of late is that a very select group of people are celebrated for so-called ‘achievements’, often that only benefit a similarly select (if self-interested) minority.

In August 2012, Bernard Jenkin, chair of the Commons Public Administration Select Committee, rallied against the number of civil servants and businessmen receiving accolades simply for ‘doing the day job’. Indeed, his acute criticism applied to a wider context of industries, not least the more obvious contender of that very summer. After the success of London 2012, it came as no surprise that the leading sports figures were bestowed with new titles: some 127 Olympians were honoured, with the newly-made-Sir Bradley Wiggins leading the pack for his Tour de France win. You’d be hard-pressed to dispute the wide recognition deserved by each and all of these inspiring individuals; but when you’ve already got a gold medal to show for your achievements, an automatic knighthood is surely excessive.

Perhaps it’s for this reason that many seem to regard Mr. Murray and Mr. Beckham as having been left out in the cold – both men are well known for their tireless efforts towards promoting and raising money for various charities, with Beckham even pledging to donate his multi-million salary with Paris Saint-Germain directly to a local children’s foundation. Of course, these gestures are all incredibly noble – but wouldn’t we all be capable of such philanthropy if we had the right lifestyle and the right income? (Then again, they’re both far more deserving contenders of honours than the Queen’s gynaecologist, let alone David Cameron’s barber).

This cynicism does not merely arise from my general lack of interest in sports. Take Dame Judi Dench, a woman I admire as one of the most superb actresses of her generation. Take also, say, the lady who’s been cleaning the toilets of First Great Western trains for over 40 years. Both of them, in their own ways, have served society in valuable measure and been duly appreciated: one has entertained worldwide audiences with her flawless acting ability; the other has kept train travel a pleasantly clean experience for British and international passengers alike. Both women are merely making a living – so why is one bound to become a Dame, and the other laughably not? Perhaps the distinction is simplistic, but it still exposes the inherent bias in rewarding individuals simply for fulfilling a career.

I remember being particularly impressed when reading about the actress Geraldine McEwan’s rejection of a DBE. Allegedly, her opinion was that honours should be reserved for voluntary workers or heroic deeds. I couldn’t be in more agreement. The type of positive contributions we should be acknowledging are not those tantamount to what Jenkin calls ‘doing the day job’; the honours system should predominantly celebrate acts of true selflessness, people who commit themselves to improving society purely for the sake of good over gain. Until that time, it’s a system that will vere towards perpetuating the ‘celebrity worship’ culture of our society.

No doubt David Beckham and Andy Murray will be knighted soon enough (and then it’ll be Gary Barlow, and then Robbie Williams). Of course, they’re not exactly inappropriate contenders, but neither are they the unsung heroes that the honours system should be in place to support. Actors can always strive for their Baftas, sportsmen for their medals, politicians for their large pay packets – but there are more worthy, less thanked individuals out there deserving of the limelight.