Among the various milestones of twentieth-century literature is the emergence of a more autonomous female narrative form. The Victorian Bildungsroman (or ‘coming of age’ novel) centred predominantly around the lives of men, with even the rare exception of a female protagonist pertaining to a more masculine narrative tradition – look no further than the iconic Jane Eyre, whose defiant voice on the page is muted after the point of marriage. But upon the strong tide of second-wave feminism in the 1960s, several glass ceilings in the field of women’s writing were finally shattered – namely in the form of Sylvia Plath’s one and only novel, The Bell Jar (1963).

Working as an intern at a New York fashion magazine, Esther Greenwood, the central character and narrator, becomes increasingly alienated from the behaviours and norms of her society. Disillusioned with the lack of freedom open to women in the 1950s, she grows to loathe the shallowness of her female company. She sinks into a state of paralysis akin to a kind of clinical depression, which stifles her creative abilities. Before long, she finds her only possible mode of expression in fantasising over elaborate ways to commit suicide. It takes several failed attempts before she reaches the road to recovery, but the ending is never quite the clean-cut, ‘happy-ever-after’ affair of a bygone novel – it abounds with tensions and ambiguities, potential for hope and yet disaster.

Perhaps this wasn’t the cleverest of novels to read within months of graduating from university – “student descends into madness at the prospect of completing studies and contemplating a career” – but it is an admirably crafted novel. Plath takes a classic plot structure and infuses it with a more complex and authentic texture, vocalising both the experiences of mental illness and life for 1950s women from a perspective not historically charted in fiction. In doing so, the novel addresses some pertinent issues about the limits on independence and unconventionality in a society so blindly subjected to such rigid gender norms.

Unsurprisingly, the novel has been cherished as Plath’s final literary testament. She famously took her own life shortly after its publication, and her boldness as a writer has since earned her a much-mythologised status in the canon of American and world fiction. But where The Bell Jar really stands out for me is in its peculiar blurring of tones and genres. For one of literature’s first forays into the dark world of depression and attempted suicide, the novel fluctuates between comedy and tragedy, black comedy and light tragedy. At times, Plath’s style read more like a chick-lit plot gone wrong; Esther Greenwood is more of a warped Bridget Jones than a modern-day Bertha Mason. The effect is doubly haunting, as Plath suggests to us the fragile boundaries between sanity and insanity. It makes for a unique, if disturbing read. ****

One continent and two decades later, and it’s Tsitsi Dangarembga’s turn to tackle that same twentieth-century question: what does it mean to be a woman growing up and living in the modern world, this time in the more deeply patriarchal context of Africa? Like Plath, Dangarembga’s novel Nervous Conditions (1988) is a semi-autobiographical account of her early life in Rhodesia during the 1960s. The story is told through the eyes of narrator and protagonist Tambu, an ambitious Shona girl who gains the opportunity of an education when her brother dies, and must struggle alone through the obstacles facing her gender position. 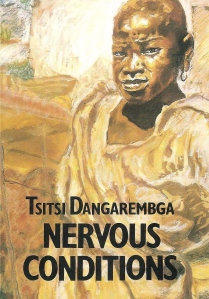 The novel’s opening line is surely one of the most captivating ever written: ‘I was not sorry when my brother died’, Tambu immediately tells us. It is spoken with a distasteful simplicity, one which alienates us through the unnaturalness of its implications; and yet it establishes Tambu as an honest narrator who will gradually engender a less ‘black and white’ response from her readers. As we discover, her brother has responded arrogantly to the privileges of his education, treating his sisters cruelly while ‘forgetting’ how to speak in his native language. Crucially, Tambu herself never judges her brother’s reaction to his superior status: aside from his dislikable nature, she merely acknowledges the social benefit his death has afforded her, and is refreshingly aware of her own humanity.

Indeed, as a thoroughly perceptive, passive and introspective figure, Tambu is an intriguing creation for a Bildungsroman. She sits largely on the perameters of her own story, constructing her own experiences by internalising the social and psychological challenges of those around her, namely the women. She watches her aunt increasingly challenge the control of her husband Babamukuru, the omnipotent force of the novel, while her cousin Nyasha breaks down in her inability to reconcile the opposing values of Western and African womanhood. Tambu’s lack of moralistic intervention, her method of ‘showing’ rather than ‘telling’ these various dilemmas, is key in depicting a world where blame cannot be apportioned; rather, she suggests that they exist as long-rooted, cyclical problems.

Most significantly, Tambu’s retrospective narration gives the novel a dual perspective; the philosophical, insightful quality of her prose reminds us that this is an educated, Westernised woman trying to reconcile herself with the distant identity of her impoverished African upbringing. The tension of Nervous Conditions pivots on this wider political dialogue, and as Tambu attempts to locate her place within this conflict, it is in the self-interrogation of her cultural and female identity that the questions of the novel reside.

As Professor Abena Busia recalls, when she once mentioned the novel at the African Studies Centre, ‘[a distinguished professor] and other African men in the room were outraged and could not, or did not know how to, focus on a story centred on a woman’s self-identity. That the book was fictional, and strategic, did not seem to be important… Nevertheless, their very resistance shows what a superb interrogation of the interconnections of patriarchal structures, whether colonial, or native and familial, Nervous Conditions really is’. A triumph on several counts, with a sequel released and a third part planned. *****