For anyone to whom the idea of ‘holidaying in Spain’ has become a little too mainstream, Andalusia will put your imagination to shame. Rich in culture and rustic in charm, the region at the south of Spain is one of Europe’s most alluring escapes. By day, this sun-drenched ‘land of light’ is a place of exquisite tapas, unique architecture and fragrant citrus trees. By night, it’s a place where traditions come to life, as the temptress flounces her flamenco dress before a cheering crowd and the matador flashes his cape across the bull fighting ring. Its history is just as dramatic: built by the Romans, rebuilt by the Moors and then conquered by Christianity, Andalucia straddles a hybrid heritage. No wonder it made the perfect destination for a 10-day getaway. 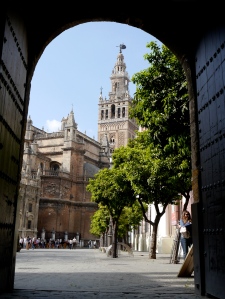 My first stop, Seville, is a city which excites all of the senses. Before you’ve even had the chance to observe any of its monuments or attractions, the sweet aroma of orange blossoms and jasmine will immediately put you under its spell. This natural perfume which follows you around the city will help you to savour the extravagance of Seville’s most treasured sights, of which there are many. The most famous is its Cathedral, the largest Gothic cathedral in the world and third-largest overall. It was built in the 15th century at the place of a 12th century mosque; the adjourning Giralda, a former minaret which was converted as a bell-tower, makes for an enriching juxtaposition that symbolises just what makes Andalusia so culturally appealing.

Aside from other notable sights such as the Plaza Espana and the recently-built Metropol Parasol, the Real Alcazar is a hidden delight – once inside, I couldn’t believe I’d ummed and ahhed about paying for a ticket. The palace is like a purpose-built maze that enchants you the further you enter: tranquil courtyards, stunning topiary, and every inch of decorative tiling is astoundingly intricate. The Moorish style is real food for the eye. 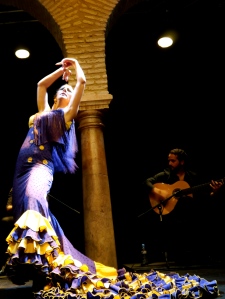 It was a very fortunate accident that I initially stumbled across Seville’s famous Flamenco Museum, a venue of live nightly performances which also provided some historical background to this intoxicating Spanish tradition. Sometimes it pays to throw away your map and see where intuition takes you – I became bewitched by the music and dance from that moment onwards. The performance featured segments by each component of flamenco – baile (the dancing), toque (guitar playing) and cante (singing) – which all culminated in the integral release of spontaneous yet controlled passion in the final dance. The performance I viewed in my next destination, Córdoba, was even more intense; it was fascinating to see the Spanish so roused and so expressive as an audience.

Córdoba is even deeper at the heart of Andalusian history. Though now a rather self-contained jewel of a town, it once presided as the centre of artistic and intellectual life in Islamic Spain. The famous Mezquita has become a cultural icon of the entire region, and it’s easy to see why. Built as a medieval Islamic mosque over 784-987 and converted into a Roman Catholic cathedral from 1236, it is a fascinating architectural blend of the Moorish and the Renaissance, the Islamic and the Catholic. It is one of the most memorable monuments you will visit in Europe.

It would be a mistake to reduce Córdoba’s appeal to this single feature, however; the town gives a very authentic, if subtle flavour of all things Andalucian. Its robust bridge dates back to the 1st century BC, the lavish gardens of the Alcazar are well worth a visit, and the narrow streets of the old town offer some of the most serene spots for simple wanderings.

What better place to end the adventure than in Granada? As soon as the hostel receptionist mentioned that tapas in the city was free, I had a feeling I would like it here very much. (If it sounds a little too good to be true, order a drink at a café and you’ll find out it isn’t!) The city can be divided into four main districts or areas of interest. There is the old city centre where bustling squares and cobbled squares entour the cathedral; secondly, there is the Realejo, the Jewish district where modern graffiti sits alongside more archaic buildings, an image which contributes to the city’s vibe of elusive edginess; there is the Albaicín, an uphill labyrinth of whitewashed streets and alleyways; and fourthly, there is the Alhambra.

The Alhambra, a sprawling Moorish palace-fortress which overlooks Granada, is perhaps the most well-known of all Islamic constructions. The Palacios Nazaríes is a masterpiece of European-Islamic art and comprises a myraid of architectural highlights from the Patio del Cuarto Dorado to the Palace of the Lions. Walk to the east of the main complex and you come to Generalife, one of the oldest surviving Moorish gardens in the world with a view onto the Alhambra itself. Indeed, you can watch the sunset over the Alhambra from numerous spots in the Albaicín, but personally I chose the gypsy settlement at Mirador san Miguel Alto.

Andalusia is host to a number of other equally attractive cities – Malaga, Almeria and Jaen – making it a ripe destination for those looking at a second as well as a first trip. It is a strikingly colourful, culturally vibrant and wholly seductive destination, with plenty to see, do and explore – so whether you’re a traveller or a holidaymaker, it is guaranteed to tick all of the boxes.

2 responses to “Andalusia: A Spanish Seduction”