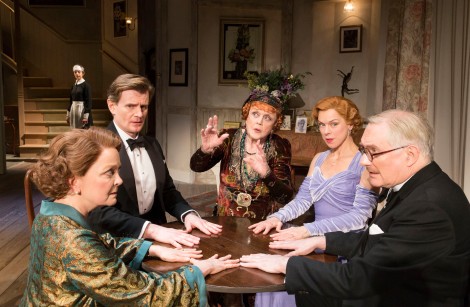 Transcendental bigamy, tumultuous ghosts, and the triumph of misogyny – few themes seem less synonymous with the aim of ‘theatrical escapism’ during the dark days of wartime London. Yet Blithe Spirit, penned by Noel Coward in a productive fervour of just five days, was an unprecedented smash hit: it ended up triumphing as the long-running West End play of its time. ‘The audience,’ Coward recalled of the first performance, ‘had to walk across planks laid over the rubble caused by a recent air raid to see a light comedy about death… it ran from that sunny summer evening through the remainder of the war and out the other side’. And for a play that has been restaged every decade since, Michael Blakemore’s latest production at the Gielgud Theatre continues to burn with all the creative verve that Coward wrote it in.

In line with research for his next book, novelist Charles Condomine (Charles Edwards) has invited the local medium, Madame Arcati (Angela Lansbury), to stage a seance. Assembling his wife Ruth (Janie Dee) and other guests around a dimly-lit table, the plan backfires disastrously: Madame Arcati, in her wacky stupor of a trance, has mysteriously summoned the ghost of Charles’ deceased ex-wife, Elvira (Jemima Rooper). As Elvira stubbornly reattaches herself to her earthly husband, Charles becomes torn between the demands of his past and present wives. The result is a play about a wonderfully cosmic (and comic) menage-a-trois, and its undertones are as dark as they are light. 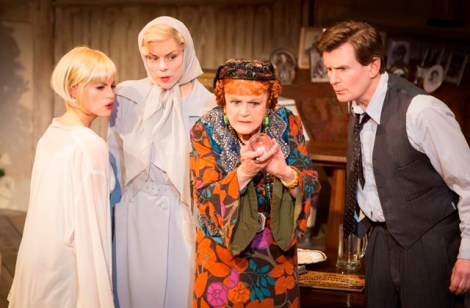 It’s hardly a surprise that the recently-appointed Dame Angela Lansbury steals the show in her first West End appearance in 40 years. The octogenarian actress simply excels at eccentricity, and she slips into the often-failed role of this dotty old psychic with real affinity: her giddy exercises around the stage as she prepares to connect with her spirit guide are effortlessly humorous.

But although Lansbury becomes the inevitable heart and ‘spirit’ of the play, the real focus of Coward’s script is on the perpetually harrassed Mr. Condomine. The protagonist is played with comic flair by Edwards, who we watch unravel from self-satisfied gentleman to hysterical husband divided in two. Both his wives are suitably immasculating – Janie Dee as the henpecking socialite, Jemima Rooper as an awkwardly seductive phantom – but a more menacing ending sees only the husband granted personal and emotional freedom. 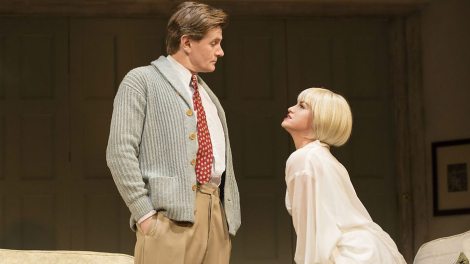 Indeed, the play balances a light-hearted tale of frivolous morals with a deeper narrative about patriarchal dominance. Through their marriage to Condomine, Ruth and Elvira are quite literally reduced to spirits waiting to be summoned beyond their control: with both women ‘whited out’ as phantoms while Condomine proclaims his liberty to embark on anotehr affair, the feminist subtext is impossible to ignore. For this reason, Susannah Clapp calls the play a ‘glacial comedy’ – in places, yes, but by and large the play flits between a multitude of other tones as unpredictably as Lansbury goes about her psychic warm-ups. No doubt, this surreal quality is what has made the play so enduring to successive audiences.

In a contemporary review of the play, Graham Greene called Blithe Spirit a ‘weary exhibition of bad taste’; more would echo that it’s a refreshingly quirky perspective on the wearier issues of marriage and relationships. It’s perfectly paced, memorably entertaining – and, of course, you do know that Angela Lansbury is in it? ****