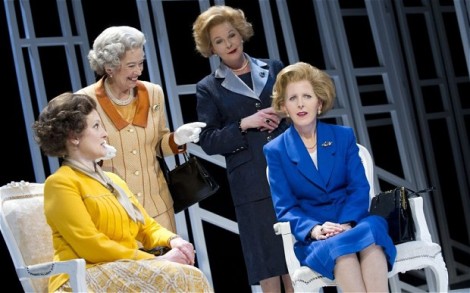 Who wouldn’t have wanted to be a fly on the wall to Margaret Thatcher’s meetings with the Queen? This is the exact premise of Moira Buffini’s new, award-winning comedy, Handbagged, and it delivers all due expectations. It’s a very inventive, quirky speculation on the clash of personalities between two of modern Britain’s most iconic female figures – except that there are four of them on stage, a young and old of each – and their place in history.

The play might best be described as a free-flowing, multi-faceted and conceptual dialogue. The young Queen (Lucy Robinson) and young Thatcher (Fenella Woolgar) sit down at tea to discuss the state of the nation. Their older counterparts – played by Marion Bailey and Stella Gonet, respectively – occasionally join them in conversation and take the reins. ‘I never said that!’ one says to correct her younger self, in a way that questions the validity of our perspective on history.

Alongside this dissonant quartertet, Jeff Rawle and Neet Mohan intermittently dive onto the stage dressed in roles ranging from Denis Thatcher to Nancy Reagan, facilitating a commentary on political events. Older Thatcher blames the younger Queen, older Queen blames the younger Thatcher – and so forth. These comical set-ups create an ever-fluctuating conversation between sovereign and minister, wisdom and experience, people and events of the 1980s. 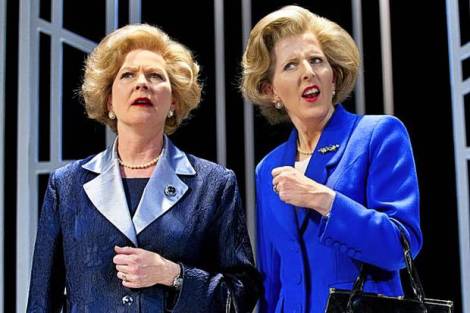 The conflicts that occur between and within these resilient characters is an enduring source of the play’s humour. We can all imagine Margaret’s hard-nosed temperament versus the Queen’s quiet authority, but the actors take these roles above caricature. Marion Bailey’s exquisitely mischievous ‘Liz’ is a stand-out performance worthy of Helen Mirren’s admiration, while Fenella Woolgar is a nuanced Iron Lady. The characters make an unlikely, if natural comedy duo: Bailey’s Queen spends the entire first half trying to rush to the interval, whereas Gonet’s stubborn Thatcher wants to push ahead with the show.

It’s all wittily observed, but the cleverest part of Handbagged is the way in which Moira Buffini’s writing intersects so many different genres. Aside from the regular use of meta-theatrical gesture, there’s revue, stand-up, sketches and soliloquy, all within the frame of a comedy. This enables the play to fully exploit its capacity for historical meditation and political parody, but there is a fluidity which stops it from ever feeling overdone.

Handbagged’s transfer to the West End in 2014 came after a successful run at the Tricycle Theatre in 2013, and a 2015 tour across the UK has recently been announced. It’s one of the most experimental and unconventional pieces of theatre I have seen on the stage in recent times, and while for that reason it hasn’t been everyone’s cup of tea, its popularity with the majority of audiences is easy to comprehend.