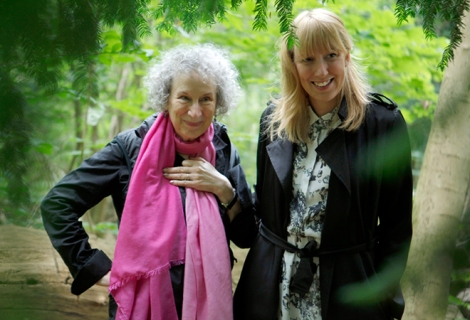 Literary legend Margaret Atwood may have just completed her latest work, but it’ll be a long time before anyone reads it. In fact, the likelihood is we’ll never be able to read it at all, for the text, as part of artist Katie Paterson’s inaugural ‘Future Library’, will be locked away and released in a hundred years’ time. We won’t know what it’s about, or where it’s set; it might be a three-line poem or a three-volume novel. All we know is that ‘it’ is called Scribbler Moon – and, curiously, that’s probably as much as we’ll ever find out.

Paterson’s project is epic in scope. It began last summer with the planting of 1,000 trees in Nordmarka, near Oslo in Norway. As they’re left to bloom over the next century, the Future Library committee will invite one ‘outstanding author’ to contribute to a concealed collection of texts for every year until 2114. At this point, after a long, fairytale-like slumber, the texts will be brought to life – and the now-forest will be cut down to provide the paper to print them.

As a work of conceptual art, the Future Library is astonishingly ambitious. Award-winning Paterson, who recently won the Sky Arts Visual Arts prize of 2014, says that the project has ‘nature, the environment at its core – and involves ecology, the interconnectedness of things, those living now and still to come. It questions the present tendency to think in short bursts of time, making decisions only for us living now.’

More than just a public artwork, however, what makes the Future Library so unique is the way it uses ecology as a basis for a literary experiment. Of Atwood’s involvement, Paterson says: ‘I imagine her words growing through the trees, an unseen energy, activated and materialised, the tree rings becoming chapters in a book.’ It’s an organic display of the relationship between nature and creativity which, by 2114, will have given birth to a remarkable body of work.

Of course, to some, the notion of writing a text and then deliberately hiding it away for 100 years might seem antithetical to the very purpose of writing. Surely the function of a novel, a play or a poem is to be appreciated: without a readership it has no cultural, contextual or literary value. But as Atwood says, ‘when you write any book you do not know who’s going to read it, and you don’t know when they’re going to read it. You don’t know their age or gender, or nationality, or anything else about them. So books, anyway, really are like the message in the bottle.’

The Future Library takes these ideas even further. By forging a dialogue between the long-gone present and the yet-unknown future, the texts will possess an even more distinctive cultural, contextual and literary value. No tradition of interpretation will be attached to them; they’ll be the fertile writings of one decade, brought to life by the reading of another.

Just as notably, the Library will grow to become a polyphonic compilation of the following century’s ideas, events and currents of thought. It will make up a historically-rich anthology of work, written by some of the finest minds in literature. David Mitchell, who was recently announced as the next contributor in 2016, describes it as ‘a human highway through time’ – and its narrative is richly unpredictable.

Such is the beauty of the Future Library: that it is defined by grand, hopeful speculation. It aspires to a significant treasury of work, born of and with nature. But more importantly, it promotes an anti-commercial view of literature, one that invests in a kind of philanthropic, greater purpose. As Atwood reiterates, who can say how it will grow each year, or finally culminate? Its potential is literally unforeseeable, and this is what makes it worthy of celebration.