House of Wax meets contemporary art at the Serpentine Sackler Gallery this summer. The latest exhibition focuses on American artist Duane Hanson and his lifelike sculptures of ordinary citizens. Like a snapshot of 1970s American society frozen in time, the result is an astonishing display of Hanson’s hyperrealistic work, both haunting and truthful in its depiction of the everyday individual.

Born in 1925, Hanson’s early artwork was inspired by the socio-political tensions and protest movements he lived through in twentieth-century America. His sculptures, still made of materials varying from bronze to fibreglass resin, took issue with social hardships, racism and violence, often making a stand for the ‘victims of the system’: Race Riot (1969), for instance, depicts a white policeman terrorising an African American man, while Vietnam Scene (1969) is a brutal display of war and its horrifying casualties. 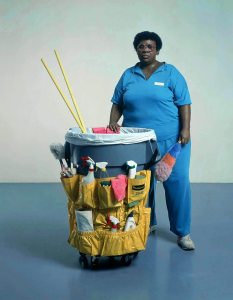 By the 1970s, however, Hanson’s work became less politically-orientated, instead turning his attention to the banal realities of contemporary society. His concern became to capture the essence of his time, rather than condemn the events which shaped it. He began to thematise everyday American life, using ordinary citizens as the subjects of his sculptures. Working, shopping or sitting in the park, each of them epitomise a mundane kind of existence – not just as an indirect critique of post-war consumer society, but also a muse to Hanson’s humanist aesthetic.

Indeed, the ‘characters’ dotted around the gallery, each ‘cast’ by Hanson from live models in his studio, feel strangely familiar. There’s Lady with Shopping Bags (1972), weighed down by her material and everyday burdens; Man on a Bench (1997), who sits clutching a paper bag, endlessly waiting; Queenie II (1988), who pauses in her thankless role as janitor with a look of disillusionment, or perhaps of quiet defiance – it’s all subjective, dependent on our angle, our own perspective.

Early critics dismissed the figures as American stereotypes. But decades later, from the eyes of a fresh generation, the reason behind their staying power is clear. Hanson has given each of his life-size, life-like ‘stereotypes’ a face, an identity, an existence. If the sculptures feel familiar at all, it’s less because they conform to generic types than because they’re all uniquely infused with a sympathy for the human condition – the recurring theme of Hanson’s work – and the more outdated they become, the more apparent this is.

Tourists II (1988), for instance, seems to satirise all the cliches of a vulgar, materialistic society and the banal, unimaginative society of late twentieth century America. But at the same time, there is a hint of compassion and pity beneath Hanson’s mockery. Many of his sculptures feature the middle and working class people of the American Dream, but their faces often reveal a sense of bewilderment, boredom, and disappointment. Their sense of alienation and dislocation is accentuated by their presence in a modern world, but in the end, their social context becomes irrelevant: we identify with the humanity in their gaze, one which often becomes strikingly self-reflexive.

But what is most poignant about these sculptures is Hanson’s regard for the overlooked members of society, those dismissed as commonplace. His art forces us to look twice – to contemplate, for a change, the builder on his break, the old couple on the bench, the vendor flea market – as the ordinary is elevated to the extraordinary. They serve as an expression of humanitarianism, encouraging us to sharpen our empathy and expand our attentiveness to fellow human beings, society, the world.

There is more than Duane to hyperrealism: ‘I’m not duplicating life, I’m making a statement about human values. I show the empty-headedness, the fatigue, the aging, the frustration. These people can’t keep up with the competition. They’re left out, psychologically handicapped.’ It is a statement better felt than seen, and you’ll leave his exhibition having earned something from his vision.

One response to “Duane Hanson: The Anti-Madame Tussauds”