Completing the Almeida’s triptych of modernised Greek tragedies, Medea takes on the boldest reincarnation. In a new translation by controversial feminist writer Rachel Cusk, the drama is relocated to the modern suburbs of Islington, with Medea recast as a struggling writer at war with her ex-husband. Fierce with anger and barbaric with vengeance, this 21st century embodiment of Euripides’ legendary character carries new dramatic power – but some of the artistic license taken with the text renders the whole thing a less relatable, more diluted production.

One of the main changes in this version is that the play opens with Medea at the peak of her marital breakdown, rather than charting its descent. From the very beginning, abandoned by her husband for a younger model, she is as much a tortured as an inherently vindictive soul. The Chorus becomes a nasty clique of yummy-mummies who patronise and cast her out of their local circle, and Cusk even introduces the new character of Medea’s mother, who blames her daughter for the divorce. By the time she enacts revenge on her adulterous husband by murdering their two children, she is a woman scorned, driven to insanity, without identity.

The main focus of the play, accentuated by Cusk’s structural adjustments, seems to be an exploration of the various pressures and judgements imposed on the modern woman. It has become a domestic rather than a political tragedy, in a way is occasionally insightful, but which more often than not points a little too excessively to Cusk herself. Having documented the experiences of her own marriage break-up in the 2012 work Aftermath, it becomes hard not to see this version as a little too invested with personal autobiography. 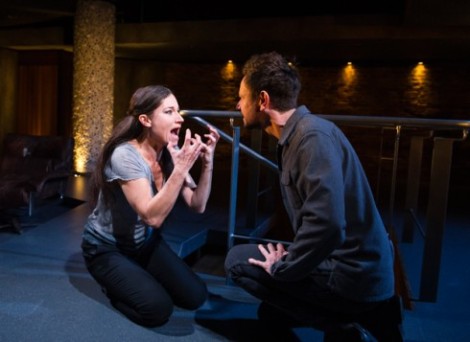 Rather than letting the text breathe and take on a more ambiguous life of its own, the result is a drama which feels too rigid and predictable in its interpretation. The script gives Medea less dimension; she seethes with rage from the off, in a way that cultivates less empathy. Instead of Cusk’s modern Medea achieving an empowered status as a modern woman, the play ends up reinforcing clichéd gender stereotypes.

That said, Kate Fleetwood, who might well have been born to take on the role of Medea (just perhaps not this one), shines with full mettle. Hardened, ruthless and yet somehow fragile when she occupies the stage alone, she captures the right level of deranged volatility, and is always immensely watchable. Justin Salinger provides a good foil to her anger as the smug, selfish, ex-husband Jason. All the cast work well – Andy de la Tour’s Creon is now the father of Medea’s love rival, Richard Cant’s King of Athens becomes a Hollywood producer – but sometimes these updated roles feel awkwardly shoehorned into the action.

There’s no doubting that this is a bold and exciting re-telling of Euripedes’ Greek tragedy. But while it might present an interesting interpretation of the play, it’s not one to open any new doors in our understanding of the original text. It might be a mistake to see this version before you’ve seen the ‘real thing’ – but then so too would it be a mistake to miss the opportunity to see Kate Fleetwood on top form.