Measure for Measure is perhaps most commonly known as one of Shakespeare’s ‘problem plays’. Merging and subverting elements of the tragic and the comic, its genre is hard to categorise – and as such, most productions of the play are judged on their ability to shine a new light on this dramatic incongruity. In Joe Hill-Gibbins’ Young Vic production, he stages the play as a satirical farce, and the result is an innovative piece of theatre which captures the outrageous spirit of Shakespeare’s work.

In a bid to purge Vienna from the seedy vices of its inhabitants, Duke Vincentio absconds and leaves his deputy Angelo in charge of the city. Discovering that Claudio has fathered a child out of wedlock, Angelo sentences him to death to set an example. When Claudio’s sister, the chaste Isabella, pleads for his life, power corrupts again as Angelo demands her virginity as the price to save him from the guillotine. But then the Duke, who has been silently watching events in the disguise of a friar, returns to the city and serves each of the characters their just – or injust – desserts.

The most striking thing about this production is the originality of Miriam Buether’s set, which is visually rich in evoking this double world of religious oppression and sexual liberty. The stage becomes a four-poster bed with a pure white curtain around the edge, which opens to reveal a huge pile of inflatable sex dolls. Throughout the play, religious imagery is also projected onto the back wall of the stage which conceals part of the action occurring in the murky underworld of Vienna; some of the events are instead streamed onto a screen next to the stage, which helps to emphasise this sense of voyeurism and secrecy. 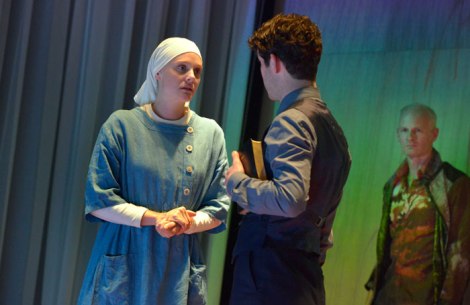 There are times when the production leans too far towards the garish, however: the delicacy of Shakespeare’s verse lost to excessive shouting; Angelo’s jilted lover Mariana randomly blaring out a rendition of Alanis Morisette’s You Oughta Know; perhaps too much of the action happening offstage. But the play redeems itself with a intelligently directed ending, as the Duke lines up all of the characters in pairs, dishing out their rewards and punishments, each of their faces conveying utter bewilderment over his motivations.

Zubin Varla carries the appropriate balance between divine-like force and duplicitous ruler as the Duke of Vienna, whose manipulative machinations seem more self-serving than benevolent. Romola Garai gives a solid performance as Isabella, communicating the intensity of her moral repression through impassioned outburst. Paul Ready is also good in his role as Angelo, slowly emerging as a flawed, tainted soul.

This is the third revival of Measure for Measure seen in London in 2015, each one of which has focused on a different angle of Shakespeare’s text. Clearly the themes of power, mercy and conscience resonate strongly with modern audiences, and this production in particular does not shy away from tackling these with daring gusto. Visually stimulating and rebellious at heart, some parts of the play may feel a little overdone, but it is still packed with some valid food for thought.